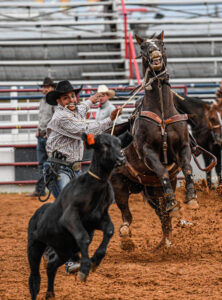 On every multi-day shoots from events to rodeos, I use them as training exercises trying different techniques in order to get the elusive perfect shot. The North Texas fair and rodeo was no exception, being a 10 day event, there was a lot of room for playing. Never having shot this arena before , the first day you have to adapt quickly and on the fly since it was a PRCA rodeo that I’m responsible for getting a good shot of each contestant and hoping for a great one of the winner of each event. The Denton arena is a older arena and shoots like a cave when the sun is gone, Saving grace the first day: the rodeo slack started at six pm which gave us a couple of events with light. we shot the rest of the slack with hotrod glass, a Nikon 200 F2 with a iso of 5000-6400, wide open and still only had a 400 shutter speed. shooting at this level with a Nikon D850 and Nikon D5 still renders a good image but leaves less quality than I want my name on.

So… Next night I knew I had to add lights to perceive the quality. Lisa continued to shoot available light for the next five performances. My new experiment since I had to shoot with lights no question about it, I decided to put both of my lighting systems through the paces and test their limits.

I have used Profoto Acute B 600 lights for over twelve years in studio and on location. Last year I bought a set of Neewer 600 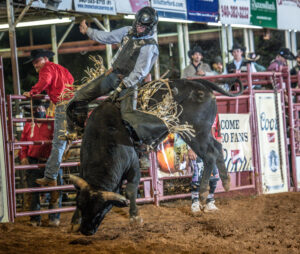 watt lights just for shooting rodeo. My thought on that, one, they were cheap, have built in rechargeable battery all self contained with high-speed sync in a nice little package. Second and third night I shot these at a setting of 1000 shutter speed, F4, ISO 1250 and lights set at 2/3 power in hopes of getting faster recycling time. I had plenty of light now but recycling time was much less than acceptable. I wound up only getting one or two shots per ride, so timing became crucial. Fourth night of the PRCA part of the rodeo I decided to set up four of the Profoto’s to light whole arena, Problem with that, they only sync up to a 250 shutter speed. no matter the arena was dark enough that the flash stopped the action without any ghosting. Settings were 250 SS, F5 @ 1000 ISO. Recycle time was dramatically increased to 3-4 shots per ride, now very acceptable. I feel like the trigger system was much better on the Profoto with built in Pocket wizards in pack and got a lot better sync over a large area with a lot of interference.

I continued to shoot the Profoto’s for next two nights with same settings, then not willing to give up on the Neewer’s, next night I set up them again, cut off HSS shot at a 250th of a sec and that helped immensely with recycle time. Last two nights of the all Bulls rodeo, we set up two sets of lights side by side. Lisa shot with the Neewer’s and I shot with the Profoto’s. This gave us a latitude to learn and play because one of us got at least one great shot of each rider and still allowed us to experiment with different angles and locations. Lisa worked on her timing with limited recycle and had aced it by last perf. 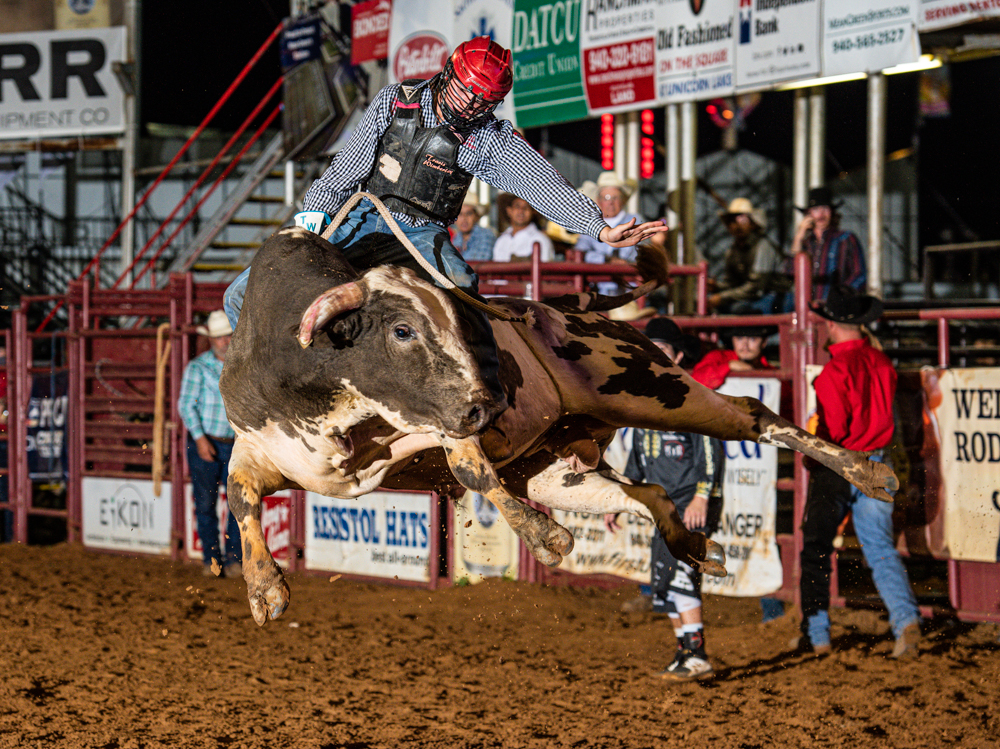 I feel like her shot above was the shot of all bull shots that both of us shot in the three day bull section at the North Texas Fair and Rodeo 2020.

Few more notes to close, focus in a arena this dark is very challenging to say the least but the Nikon F5 and a 70-200 was nailing it 70% of the time. The prime lenses I used, the 400 F2.8 and the 200 F2 gave a lot more consistent focus since they let more light in.

The other variable in shooting rodeo is the bucking stock provided by the stock contractor, Andrews did not disappoint, the stock was amazing.

Some of our favs from the event.

Learn from the mistake of others – you can never live long enough to make them all yourself!~Fred TonneTweet